Sagan got his first hair cut and I felt like pulling mine out. This last week was full of highs and lows. It has been an emotional roller coaster. One day he is a complete angel genius and the next he is possessed by demons. My anxiety has risen because I am so in love with him that I am feeling more like a helicopter mom. I am hyper-vigilant to every sound he makes which is okay because it is only me that makes myself crazy. Now I want to double-check everything that others are doing which makes them crazy too. There have been a few close calls with him getting away or getting hurt not by something I have done wrong, so my own anxiety has been reinforced. I am sure I will continue to be vigilant, but I can be more zen about it.

His grooming session went very well. He was as good as a toothy 4 month old can be. He is very handsome. He feels like velvet. 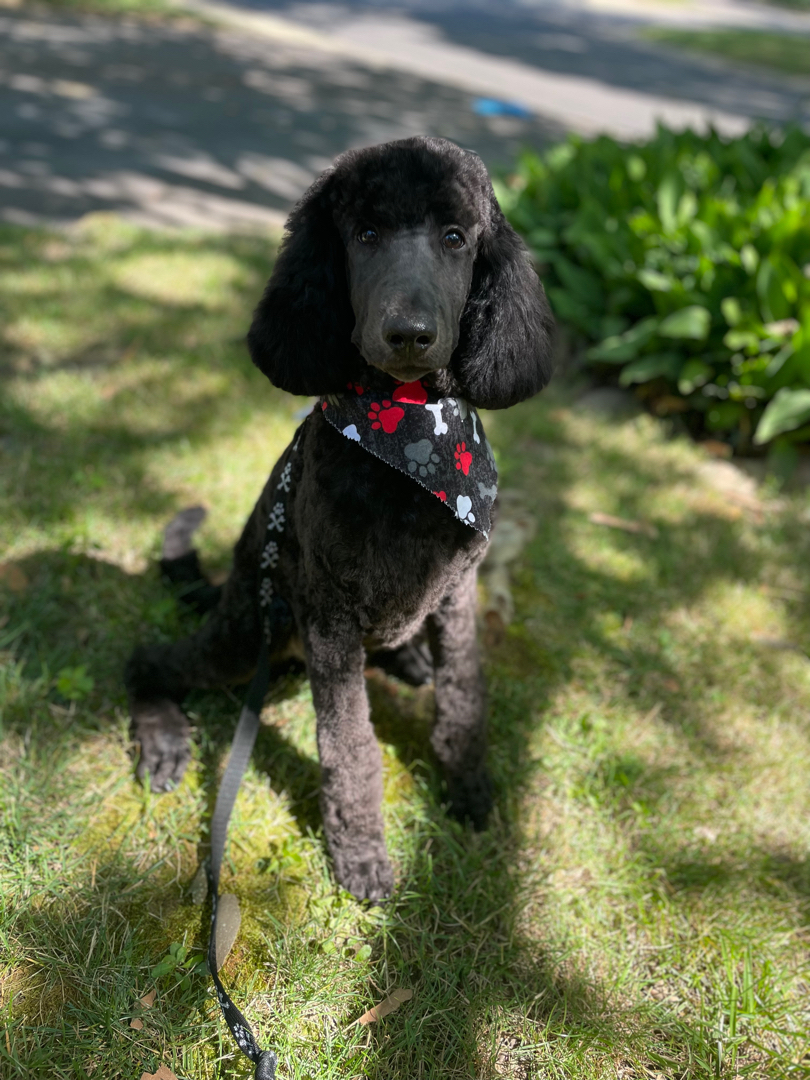 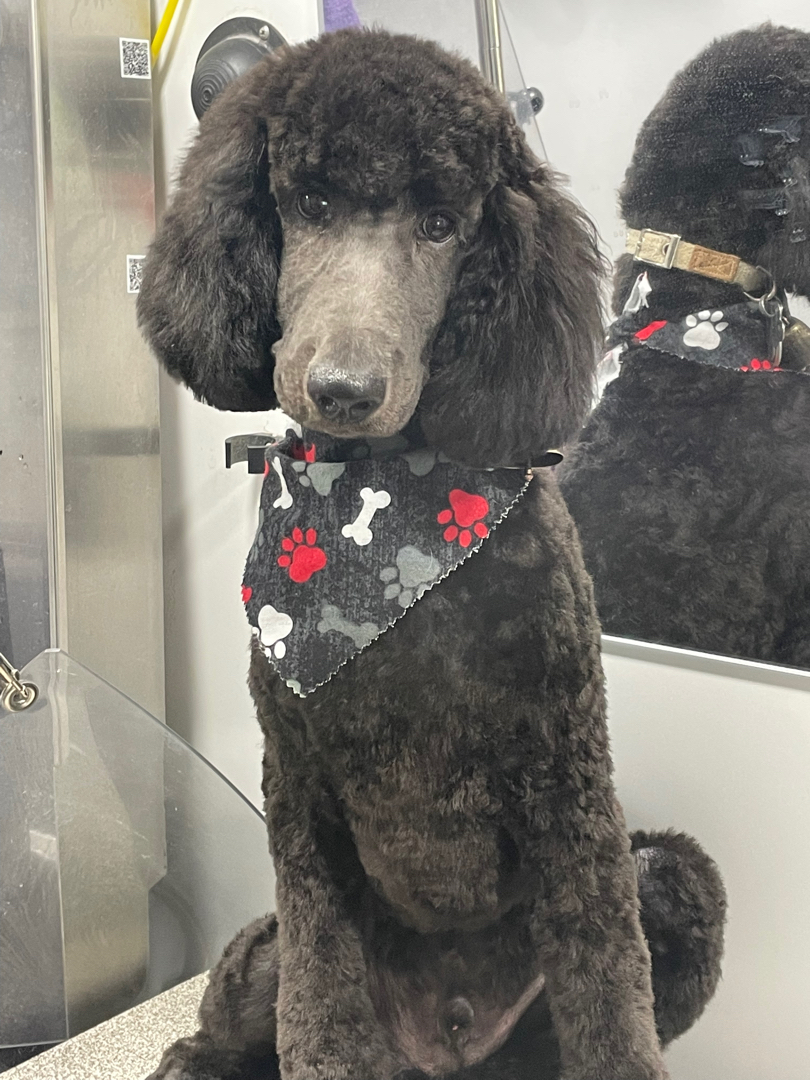 Pictures above show Sagan after his first grooming.

I ordered a custom vest for him which says "Guide Dog in Training."  It is orange and black and looks great on him. He doesn’t seem to mind it at all. His first time wearing it was last Tuesday when we took him to an almost 2 hour appointment. The building had an elevator which did not phase him. When we got to the office, he went down and under and stayed there the whole time. I treated him occasionally. He mostly slept. I was so proud. I also took him to visit a neighbor with his jacket. It was a little more challenging to keep him down and under because there was a creature underneath the porch deck. Overall he did quite well. 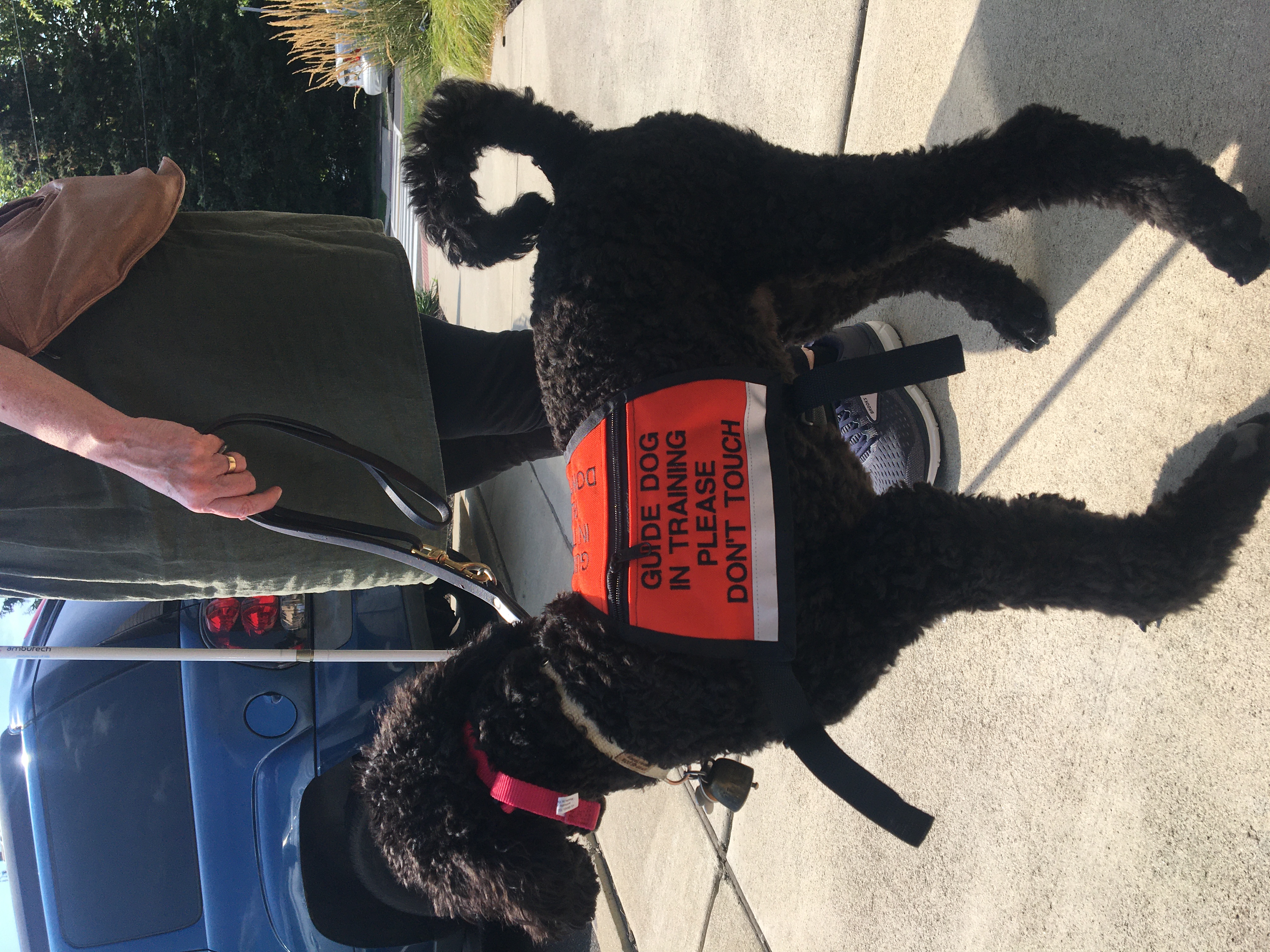 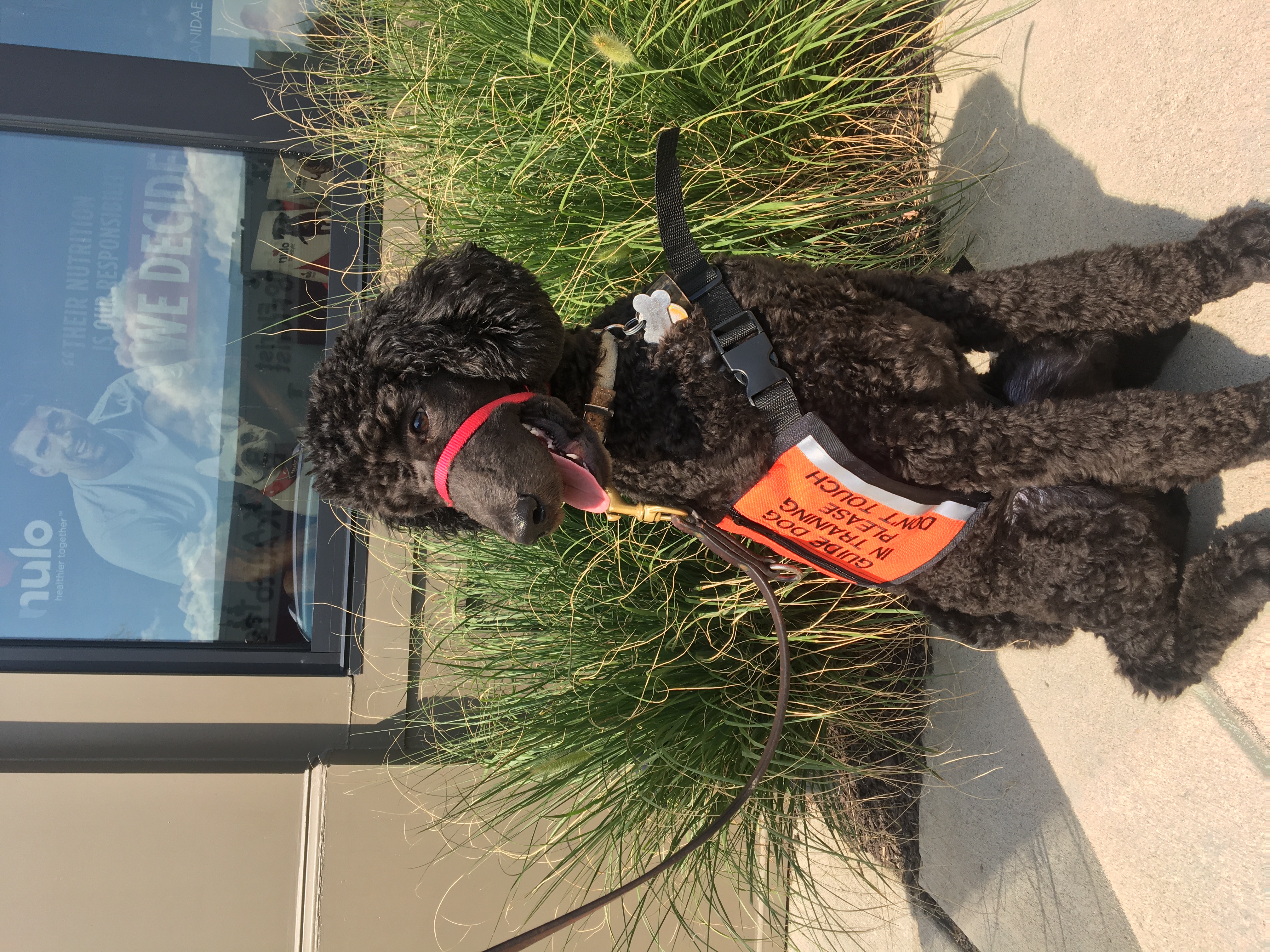 Pictures above show Sagan outside the Dogs and Cats Rule Store. He is wearing his new guide dog vest.

Susie, the trainer came this week. We learned Paw Pad positioning. This is the use of using an elevated surface to help Sagan find and keep a proper position while standing at my side. Both of us learned it quickly. We practice every day. 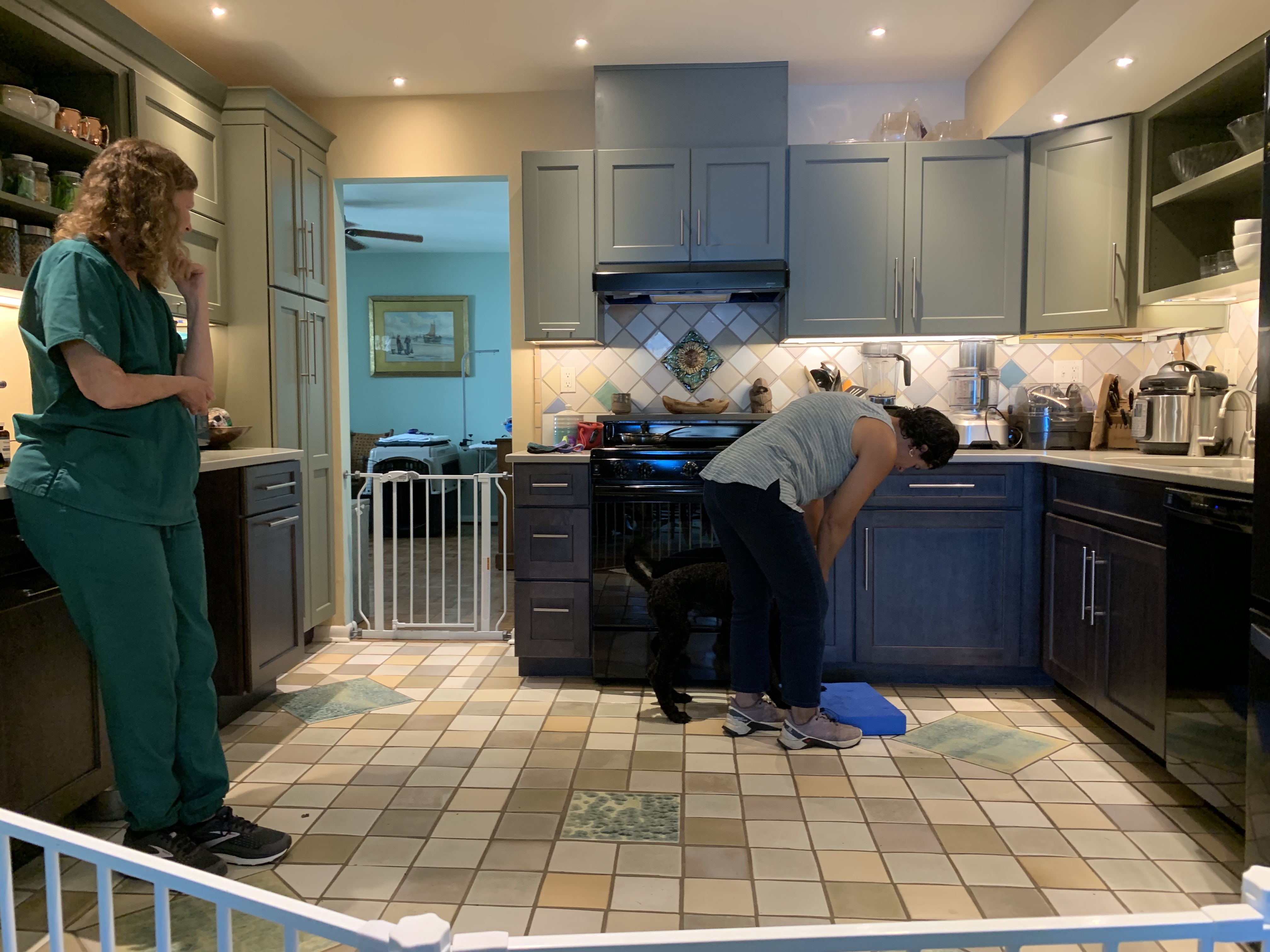 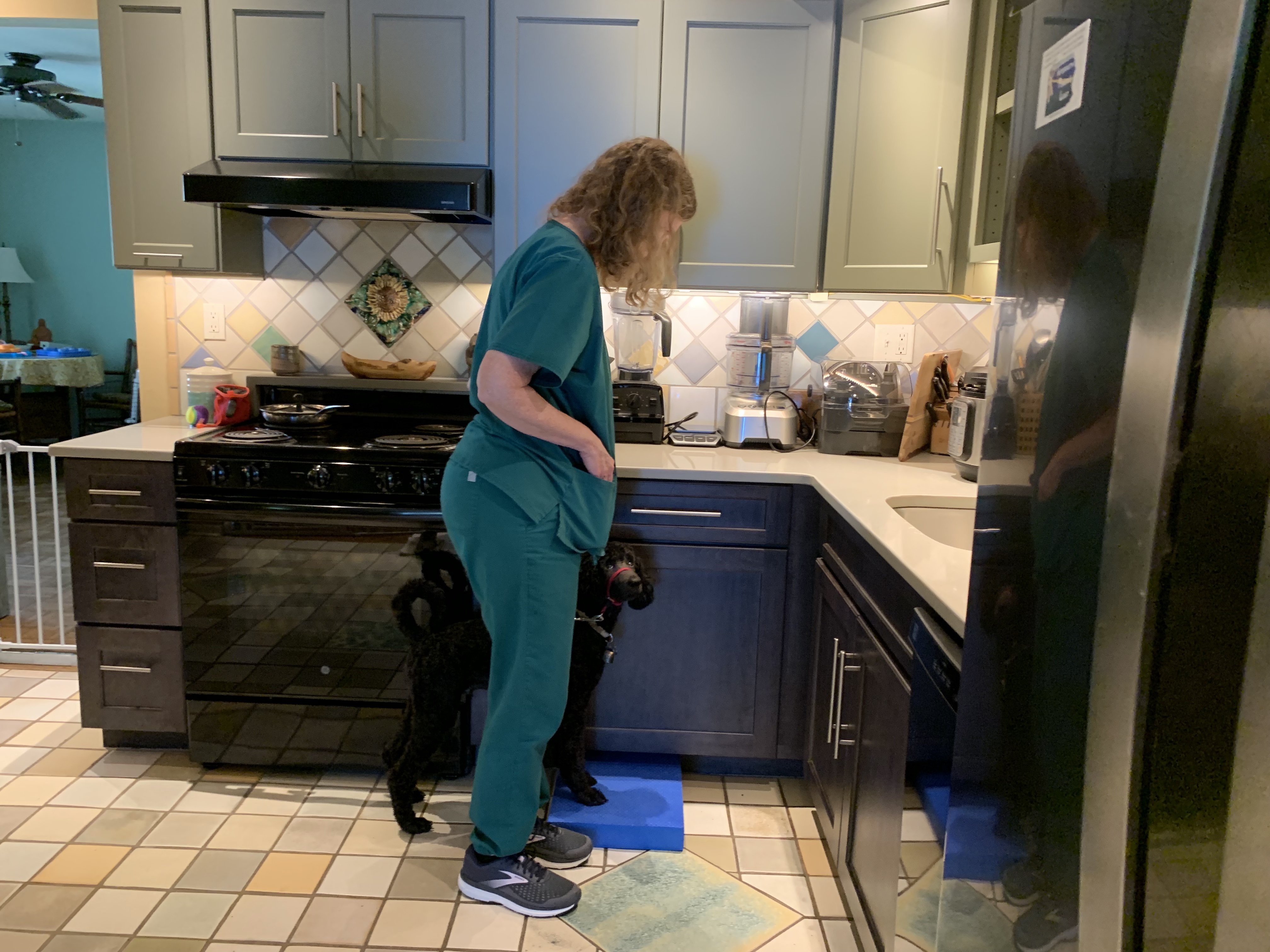 Pictures above show Suzy and Mel training Sagan on the blue mat.

Next, we worked on staying on his mat as I went out of his sight. He stayed put without any prompting from the trainer. The idea is to always set him up for success. With the trainer there by his side, while I command him to stay, she can encourage him to stay. He then gets rewarded for doing such a good job. The rewards will be faded out over time. Sagan and I can practice alone by using a long leash and very slowly increasing duration, distractions, and distance. Susy breaks everything down to to simple concepts so it is easy to implement.

This journey is not all unicorns and rainbows though. He has begun to bark when startled. Once he gets going, it is challenging to get through it. We have discussed it with the trainer and we have some strategies. He is also barking more when frustrated or he wants something. He is definitely in a developmental phase that requires proper handling so bad habits do not get formed. His barking puts my nerves on edge which helps nothing. It is essential that barking is under control, so the stakes are high.

The hardest days are those when my energy is so low that working with him takes a great deal of pure determination on my part. I feel like saying bad words at him and ignoring him altogether. Taking a puppy into your home is a very real commitment and adding to that, committing to molding great manners in all situations is huge. The task I have set for myself is coming clearer as the days pass. This is not easy but my purpose is clear and my emotional stamina is growing. I love him and what we are accomplishing together.