Sagan turned 9 months old on December 2nd. Needless to say, this is an obvious excuse for more toys. Instead of buying them this time, I made them. I received quite a few good ideas in response to my last blog, so I got creative myself.

The first toy I made is still in action. I found an old canvas shopping bag and put some of the toys he never plays with inside of it. I tied up the handles in such a way that the toys inside could not come out. The handles are great hand holds for playing tug. He really enjoys running and shaking it to make sure it is really dead. We play tug together and I ask him to stay while I hide it. He has ripped a few holes in it but it remains viable for now. 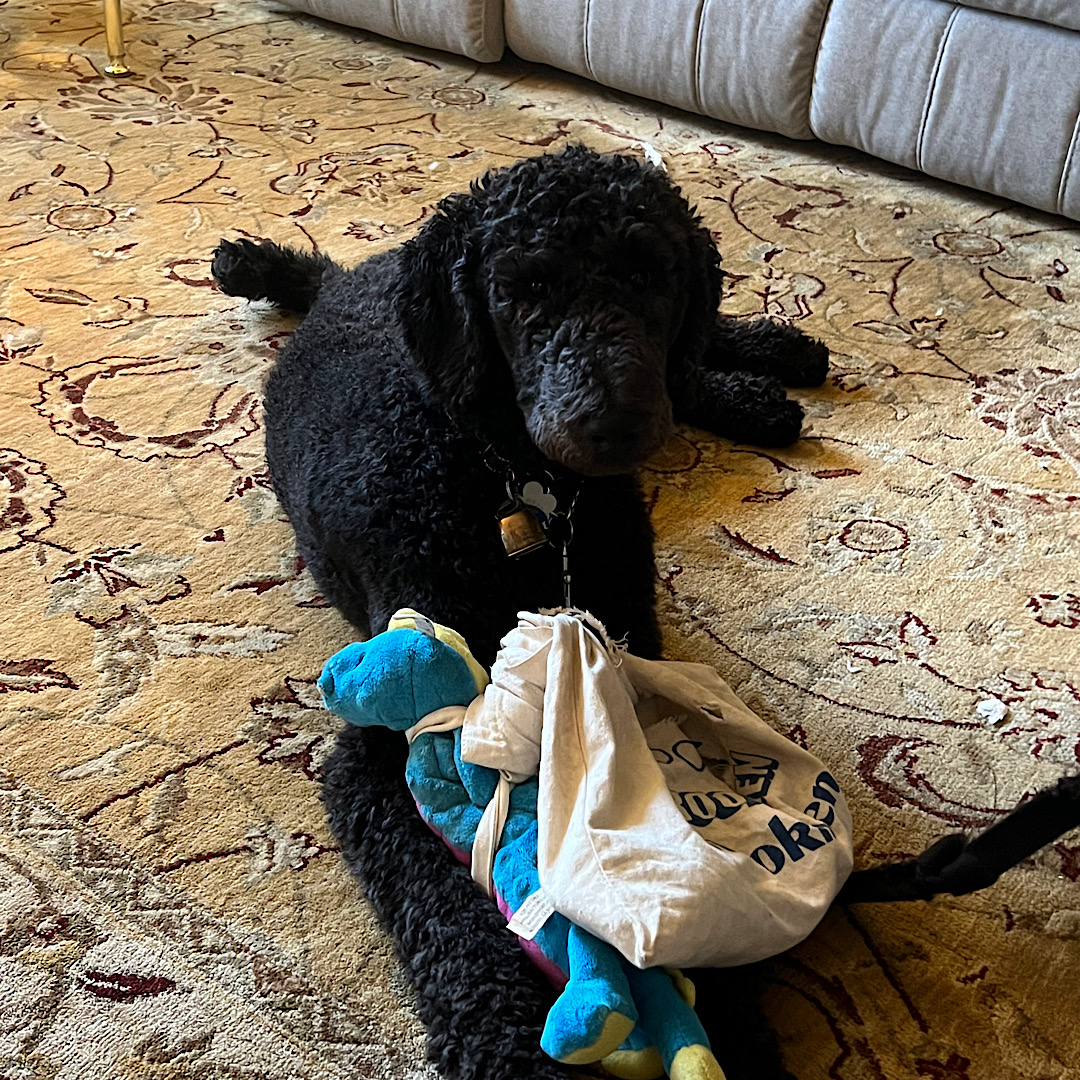 The picture above shows Sagan in the living room with his canvas bag toy and stuffed dragon.

Next, I cut the legs off an old pair of jeans. I opened up the leg and then rolled it lengthwise with the cut seam inside. I tied two knots and he loves it. People also suggested that I cut the pant leg in strips and braid them with knots at the ends. I will try that when these get disappeared.

We started public access in earnest this week. We took him to a hardware store, a pet store, a huge grocery store, and a large department store. The latter was with our trainer. She walked him all over using the Gentle Leader and the martingale. Our goal is to move away from the Gentle Leader. He is getting so much better. He did have a few narcissistic moments when he kept seeing himself in mirrors in several of the aisles. He did manage to get over that pretty quickly. I am grateful he did not bark at his reflection like he usually does. He was also very distracted by some young children. The trainer says we need to find some young kids to hang out with in a relaxed way. I will need to make some new friends to make that happen. 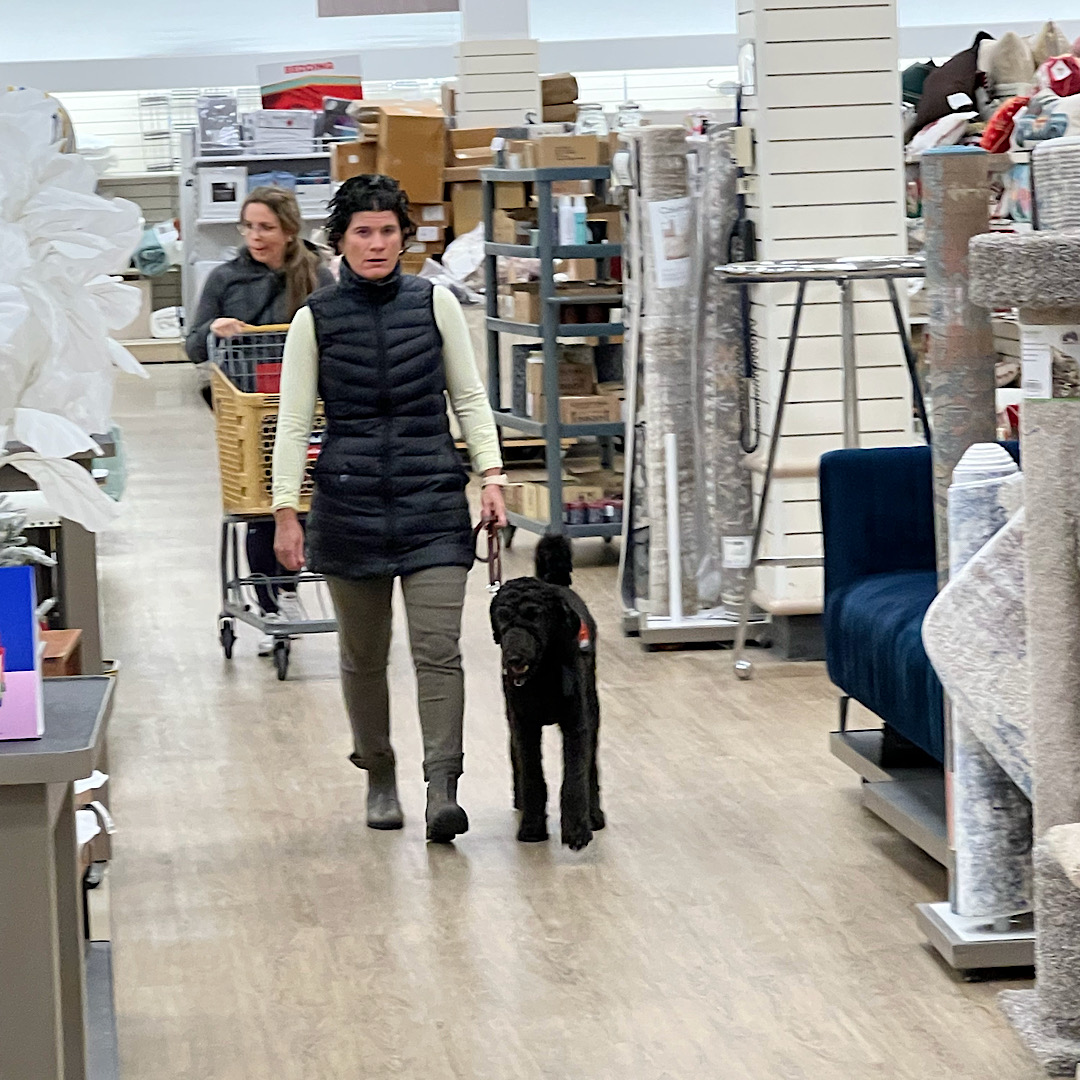 The picture above shows the trainer walking Sagan in the department store.

Our biggest challenge right now is house manners. If he is not in his crate or tethered in some fashion, he is in constant motion. We have been allowing him to roam freely in the house as much as we can but honestly, it is pretty frustrating. Everything and I mean everything is prime chewing material. Just when I think I can relax for a moment, he finds something I thought was out of his reach. He keeps finding dental floss and air pod cases. It is virtually impossible to protect him from every potential danger. Our house is getting darker and darker because he keeps finding the electric cords that go to lamps. The lamps get banished to the garage for the time being. Once again, “management” is the word of the week. My husband and I are learning not to put our air pods and anything else dangerous in pants pockets that are not secure. Things fall out of pockets on the couch and are targets for an observant puppy. I have also been working on getting Sagan to “trade”. The idea is to give him something more valuable than what is in his mouth at the time. Sometimes this works but more often than not, he is certain that what it is in his mouth at that moment is the best thing ever. I have had quite a few panicky moments when he has something and I have no idea what it is. I even tried sardines as the trade and he opted for the bottle in his mouth. It ended happily ever after but my heart starts racing at times. I just keep telling myself that dogs seem to live fairly well in the wild so I am trying to trust more in his own survival instincts.

My goal for the next couple of weeks is to train him to go to his bed and stay there instead of pacing like a caged lion. We are also working on him staying at the top or bottom of the staircase when not on a leash when we are going up and down ourselves. He likes to go flying around us on the stairs which is absolutely not acceptable. I think he will learn this quickly.

I think holiday decorations will pretty much be nonexistent this year due to Sagan. I am not up to worrying every second about where he is and what he is into. Maybe I will put some lights on the mantle or hang them from the ceiling.

Overall, I am thrilled with our progress and we are having lots of fun together even though it may sound like I am complaining. This is a real-life slice of life with a puppy. We have located a puppy friend for him. The family has a large fenced-in yard. Sagan had the best time playing. We hope to make this a once-a-week event and to make some new dog friends for variety. I don’t want you to think it is all work and no play for Sagan. 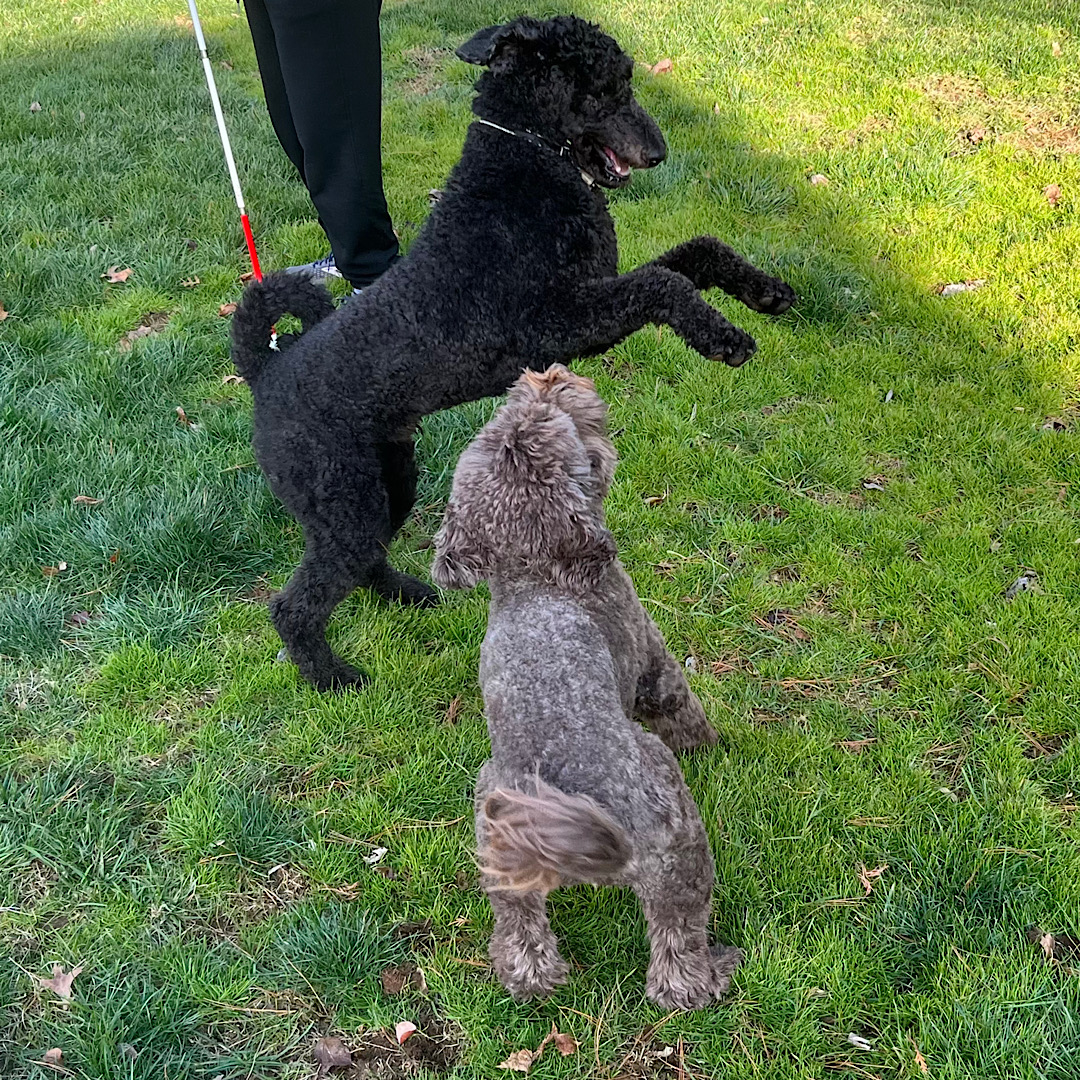 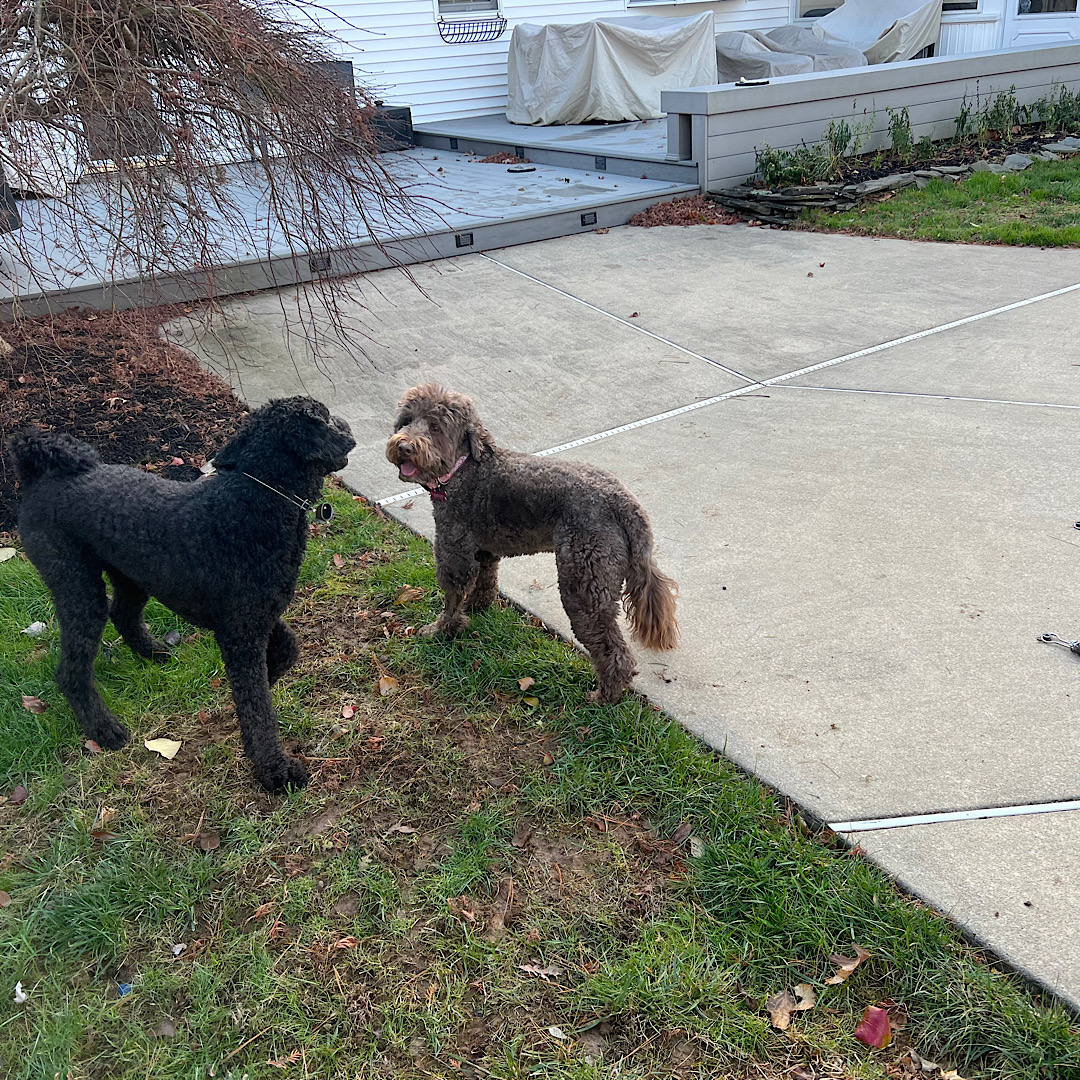 The 2 pictures above show Sagan on his playdate with his new dog friend, Trixie.