After the experience the week before last with Sagan and diarrhea, I have become so appreciative of perfect poops. The regularity of production and the consistency of shape and quantity has captured my fascination. Which foods create the desired effect? What is the best way to clean it up and eliminate odors? Is it okay to put down lime in the fecal zone or is that bad for the dogs? Is it terribly uncouth to put it down our human toilets? So many questions to ponder.

Maybe you think I am going a little crazy or maybe a lot, but as puppy raisers, we need to be observant. The more information we can glean from their bodily functions, the healthier our dogs will be. So far, being consistent with a mostly raw diet has made for the best production values. I rotate brands of raw dog food and training kibble. My intention is to create a well-rounded microbiome so as not to predispose Sagan to food sensitivities. All is well so far except for the overindulgence of tomatoes the week before. As for putting dog poop down human toilets is still on the table for pondering. 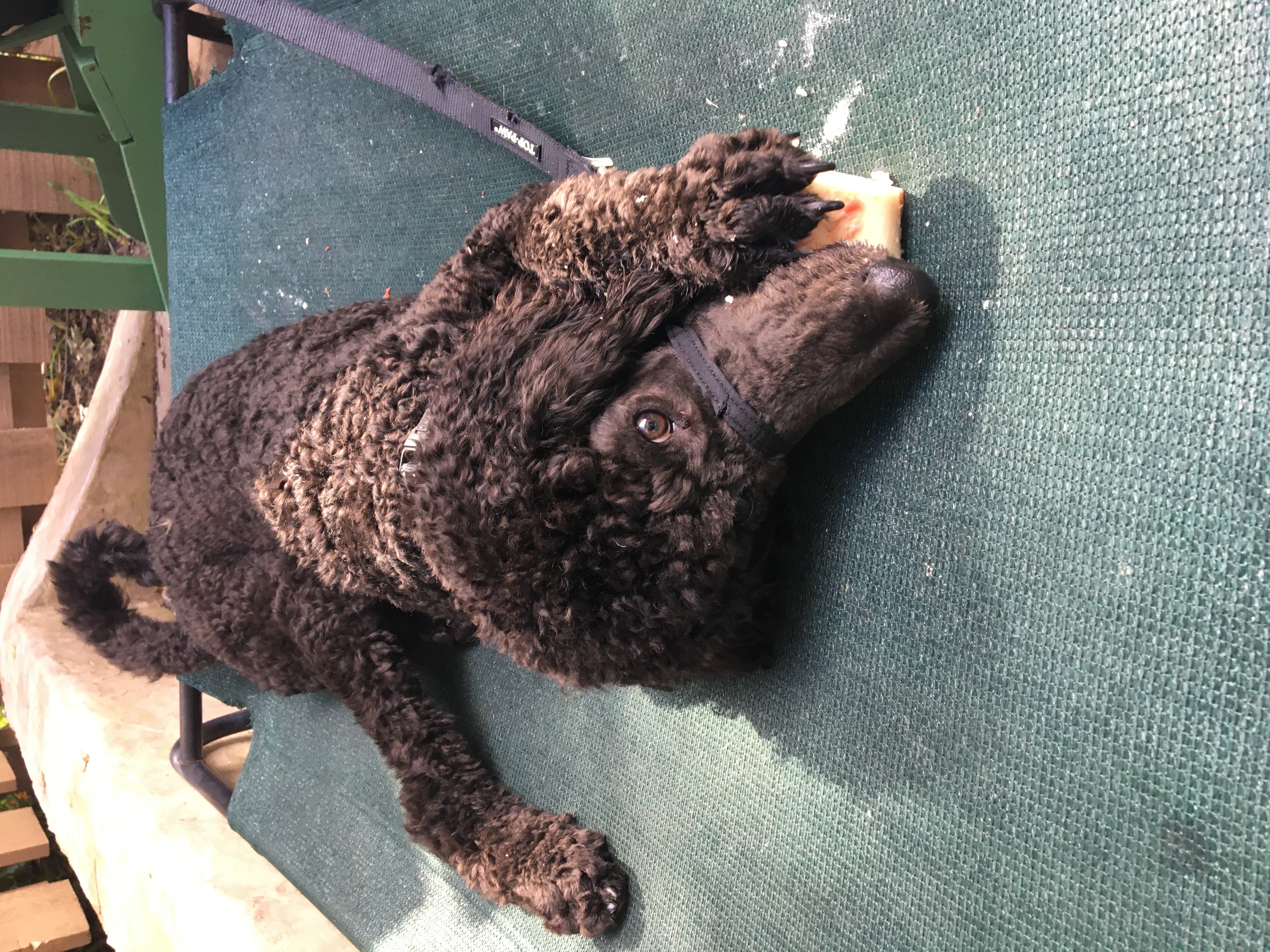 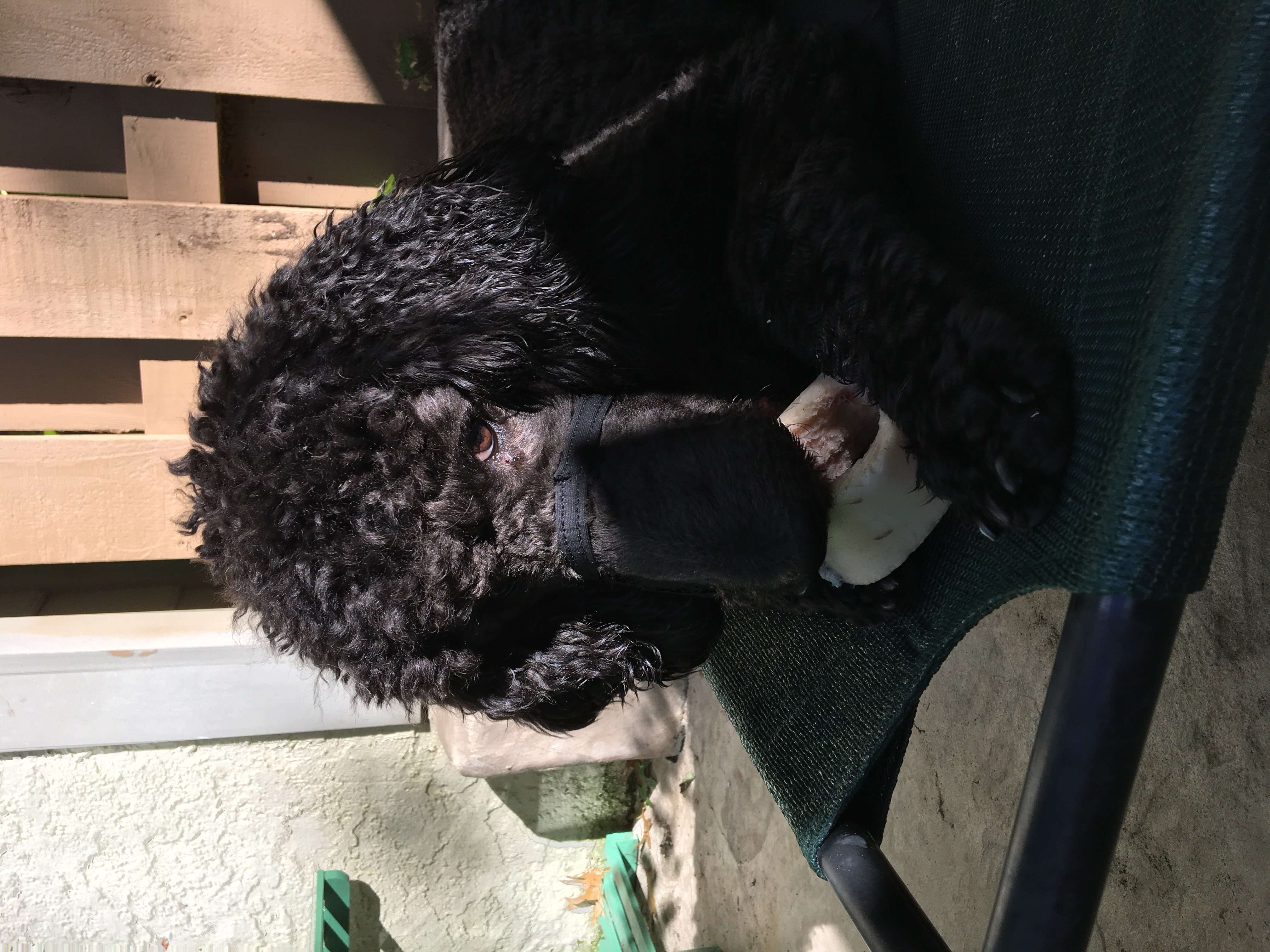 The pictures above show Sagan outside on his dog bed enjoying a marrow bone in the sun.

Training last week was so fun! Sagan is really wrapping his beautiful head around what his education is all about. One day he woke up and seemed to just understand what was expected. He has begun generalizing behaviors outside the narrow training zone of our house and grounds. He recognizes seats as chairs and benches. He reliably knows the difference between doors with different names such as front door, back door, and garage door. I dare not brag though because I know he can wake up another day seemingly to have forgotten everything. It is funny to watch him offer up his behaviors when he is not quite sure what I am asking of him. He is so eager to please and food is a great motivator for him. His training would be much more challenging if he was not food motivated.

Susie the trainer, and Stu are now taking him on longer training walks. He went to an arts festival yesterday with lots of people and dogs. He did extremely well. He did shy away from school buses but he had never seen such a thing before. I doubt it will become a problem. He is still distracted by children and other dogs which we will keep working on. He is a puppy after all and instant perfection is not expected. 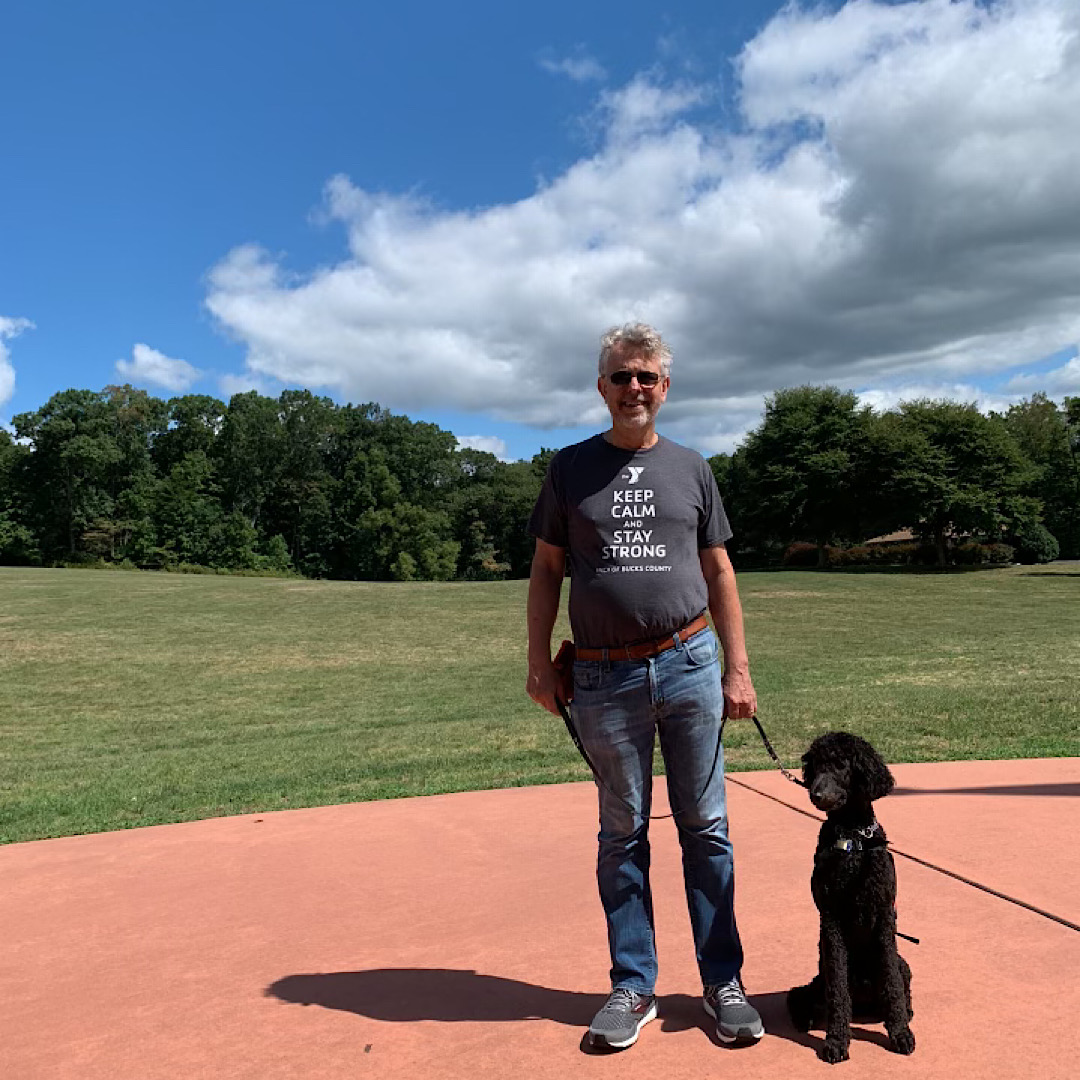 The picture above shows Stu training Sagan at the park. Sagan is sitting at Stu's left side while they pause for a picture.

I want to share a grooming tool that I have found to be absolutely superior. It is expensive but worth it. Poodle hair requires a special brush to get through the curly, thick hair. The Big G Slicker brush by Chris Christensen is a treat to use. Sagan has always endured his grooming sessions with forbearance but he seems to really enjoy them now. He puts his front paws on the grooming table and I lift up his back end. He settles down and I get to work. I have chosen for the time being not to treat him with internal interventions for tick-borne diseases or fleas so grooming is super important. My goal is to make it a meditation for me and a pure joy for him. The link for the brush is below. I am not affiliated with this company in any way.

Overall, this last week has been fun and mostly peaceful except when he found a pen on the floor and proceeded to take it apart. I was on it so no harm was incurred. He moves like quiet lightning at times so I need to be ever vigilant.